To whom it may concern,

I write to you about the ongoing environmental and humanitarian disaster revolving around the drying of Urmia Lake. I have been working together with professor Dr. Rasouli and Dr. Chaung from Macquarie University in Sydney researching climate change and particularly the effects on Urmia Lake.

Urmia lake is located in the Provence of Azerbaijan in north-west Iran. It is the 3rd largest salt lake in the world and the largest in the middle-east with a surface area of 6,100 km squared, 140 km long and 85km wide. There are an estimated 76 million people living within a 500km radius of the lake. In 2015 the United Nations Environmental protection agency (UNEP) estimated a population of over 10 million people living within approximately 200km of the lake.

Urmia Lake is essential for the nation’s Ecosystem, agricultural food and water distribution in addition to the local economy.  The lake is the largest known habitat for Artemia (salt water shrimp) which contribute to sustaining over 226 documented species of migrating birds such as flamingos, pelicans, storks, and ibises, 27 species of amphibians and reptiles and 24 species of mammals. In 1971 the Ramsar Convention declared lake Urmia a Wetland of International Importance, and in 1976 UNESCO Declared Lake Urmia to be a Designated Biosphere Reserve.

Dr Rasouli’s satellite imaging analysis determined that between 1992 to 2017 Lake Urmia has reduced by 70% totalling only 2,300 km2 down from 6,100 km2. This means that 70% of the land which was underwater, is now dry earth covered in layers of crystallised salt.

To the local Ecosystem and to health of the 10 million locals who will be forced to migrate away from the hazardous area.

Now what is the causing the drying of the lake ?

The first is climate change.  Due to the drought the lake began to dry up around since 1992.

According to the UNEP the Iranian Government’s mismanagement has worsened the problem. Aga Kouchaka (2015) reports that as recent as 2012 the Iranian government continued to approve the construction of over 200 dams and irrigation projects in the catchment basin. This is very important because the dams caused a diversion of water away from the lake while the irrigations also caused excessive amounts of water to be redirected to local farms.

The make the matters worse, in 2008 the government completed construction of a highway which run straight through the lake only leaving a small space for water flow. This caused the lake to further shrink and divide into two parts.

In August 2016 NASA shared satellite imaging showing Urmia Lake which had turned red. It has been reported that the change in colour was a direct result of the lake of water flow which caused a change in the bacterial make-up of the water.

It is often argued that the mismanagement of Urmia Lake and the province of Azerbaijan is international. This is based on the history of the estimated 35 million Azerbaijani Turks living on their ancestral lands in North West Iran. Since 1925 the Azerbaijani people have been subjected to a long history of aggressive polices of systematic assimilation, racial discrimination and over all neglect. For this reason we have little faith in the central government making any genuine effort to restore the lake.

The current status of this lake should be very concerning for everyone around the world. This is obviously a problem for the locals, their economy, their health and the natural ecosystem, but it is also a European western country problem and i will explain why.

From 2011 over 5 million Syrian refugees travelled to Europe and the middle-east, causing well documented European migration crisis.  Many nations were overwhelmed by the sudden influx of refugees as they laked the infrastructure to take in such large numbers. Over 1.3 million refugees migrated to Europe causing countries such as hungry and August to be so overwhelmed that they closed their borders.  At present the crisis seems to have quieted down. We believed that if Urmia Lake continues to shrink, it is more than likely that history will repeat itself and there will be a sudden influx of Iranian refugees to this part of the world.  However this time there will be over 10 million looking for a new home. The destruction of Urmia Lake is an ongoing environmental destruction and future humanitarian crisis. We ask you to join us in the save Urmia lake movement.

In recent years the Urmia Lake has become a well known topic where many groups have joined efforts to save Urmia Lake:

There are a few solutions to this problem. The first is by the Iranian government making genuine changes by releasing water from the dams in an effort to partially restore the lakes water levels. The second is by removing the highway from the lake which will restore waterflow to Urmia Lake. The third is to regulate the irrigation from the surrounding farms. However, history has shown that the central Iranian government is not interested in the management or care of its people or its land, particularly in the Azerbaijanian region of Iran. It is our opinion that the only way that genuine efforts will be made to save Urmia Lake is to support the local movement for South Azerbaijan’s right to self-determination. When the south Azerbaijanian people are given control over their Ancestral lands, they will restore it for the survival of their livelihoods and their future generations. It is the local Azerbaijani people who have the most to lose, and will do whatever it takes to save Urmia lake.

We ask you to:

Before I conclude, I would like to share a few lines which have been written about Urmia Lake by some locals. They say…

“You should not be dressed in white,

You are not a bride,

You should be dressed in blue,

Otherwise I will die…” 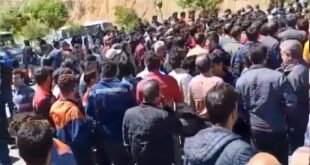 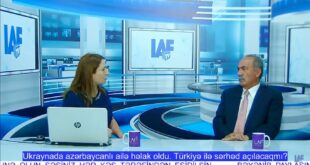